In spite of rain and generally... how can we put this... Northwest weather, many braved the chill to make for a nice turnout.  Special thanks to the artists, Jen Till and Renee Jameson, and their families and supporters; you are the best!

Posted by The Island Gallery at 6:25 PM No comments:

Artwalk is upon us, and here's some information for our April show.  Ranger will be playing as part of a duo, and of course we'd love you to join us for conversation and a sip of wine! 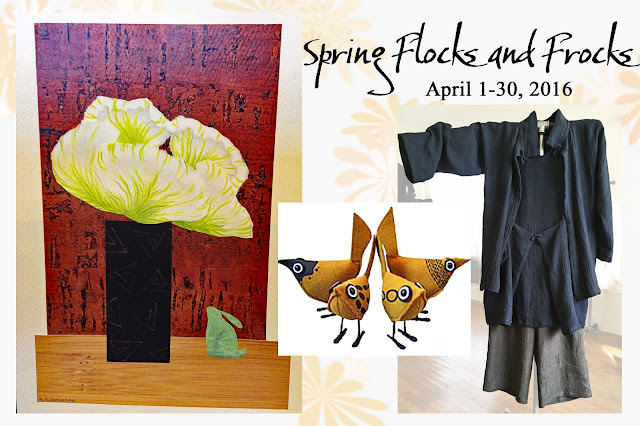 Spring brings a renewal of all things.
Join us in celebrating the new season and the return of our colorful feathered friends
with exciting wearable, wall and sculptural art.

Ashley Licht is a textile artist whose current artistic passion is screen printing.  Her felted birds are delightful as a single little buddy or congregated in flocks to offer assistance to we hapless humans.


Susan C. Petersen: After 20 years as an art consultant, framing designer and framer, Bainbridge Islander Susan C. Petersen resumed her art career in 2002, working in several mediums, including cards, collages, paintings, illustrations, handmade books, and poetry.  She is strongly influenced by Asian art and philosophy, haiku poetry, and the day’s social and environmental issues, informed by her strong connection to nature and music.  These influences are readily visible in her Wabi Sabi cards, a collection consisting of over 50 regular designs and original Bonsai and Ikebana styles.  More recently she has introduced a Shoji and Paris Market series, as well as a whimsical Sans Souci Café collage series. This series incorporates small, intimate caricatures presenting a rogue’s gallery of characters from the lighter side of her imagination, in which every picture tells a story.

Susan comments on her work, and the qualities of Wabi Sabi:

“All cards are hand-collaged using pressed flowers, leaves, and other natural materials I hand-gather and preserve, as well as papers from around the world… impermanence, imperfection, and incompleteness... Wabi Sabi connotes the transient beauty of all things.  It is the state of flux between beginning and ending.  It exists in the wear or patina of objects as they age.  It is defined by what is rustic, modest, and natural.  Nothing lasts.  Nothing is perfect.  Nothing is finished.  All things will pass away... My work as an artist pays homage to the transient beauty of life in the delicate intimacy depicted in each card or caricature I create.”

Carol Lee Shanks is enjoying a 28-year career dedicated to designing unique handcrafted clothing designs and textile art pieces. She has a great reverence for cloth, allowing it to be the foundation of her inspiration and personally constructs each garment, one by one, building collections made from carefully selected fine materials. Her dressing concept encompasses coordinated silhouettes layered for style and comfort. She has designed an understated, timeless look meant to be collected piece by piece over many seasons.

Carol has a degree in Textile and Costume Design from the University of California at Davis.  She now works and exhibits her clothing and textile art from her Berkeley, California studio.  Her work is shown and sold in galleries throughout the United States and has been included in international shows and fiber art publications.

Katrin Noon for Spirithouse: An unconventional twist on traditional design, plus a dedication to comfort, is the hallmark of womenswear by Spirithouse, a Los Angeles clothing company. Katrin Noon, its creative force, creates collections that explore proportions and combine modern edginess with romantic detailing.  Noon studied painting at the San Francisco Art Institute, and pattern drafting and draping under Simone Sethna. After graduation, the artist traveled throughout the British Isles, Europe and Western Asia, an experience that would solidify her love and interest in textiles.

Christine Sundt:  "Pieces of metal, faceted or natural stones, colors, textures around me are the forces that help me shape and make my one-of-a-kind jewelry creations. I draw inspiration from art and nature, but seldom start with a firm idea of what the outcome will be. My drawings are merely records of thoughts rather than plans or patterns. Works come together on my workbench as elements find each other through proximity, association, and chance."

Diane Turner:  With a farming background and as an animal lover, Diane has always loved art as passionately. In 1997 she and her husband began their own farm journey, with a variety of animals; but a year ago they  discovered angora goats. With their comical antics, sweet, affectionate personalities and gorgeous fleeces, Diane was hooked and began felting with their wool and fleece.  For Diane, combining animals and art could not be a more perfect fit!


Posted by The Island Gallery at 1:37 AM No comments:

Just to sweeten that last post, here's an up-to-the-minute peek at two more luscious vests we received yesterday from Maggy Pavlou.  Lucky us!

Both of these are pretty perfect, from the fun, modern vibe of the black and turquoise to the elegant form of the grey and white: 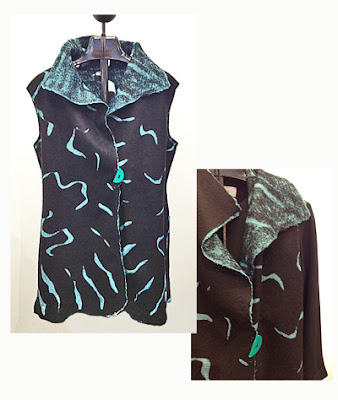 And as always, we love the buttons!  An extra touch that delights. 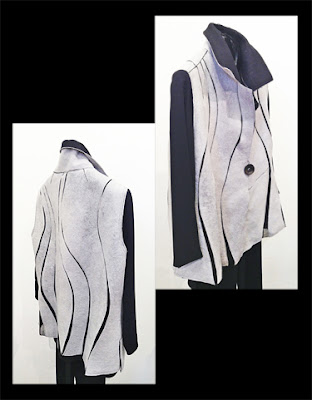 The elegant look of this one - which Maggy has named "Just Lines", fittingly - is most pleasing, with its slimming vertical aspect and clean, geometric styling.

Click on the links for further information in the online shop, or to see all of the items currently available from this outstanding artist, start here at her shop pages.
Posted by The Island Gallery at 12:48 PM No comments:

Let's start spring with a new blog post series!  These short and to-the-point articles will be designed to alert you as soon as possible to the very latest items arriving in the Gallery and, specifically, to what is newly available in our wonderful online shop.

If you haven't visited us online yet, you really should:  it's quite a visual treat, whether for making quick purchases from a distance or enjoying a relaxing window shopping session from your coziest armchair, in search of special gifts or splurges for yourself.  Simply click on the links in each item to visit them online for availability, pricing and other information, and to access the artists' individual pages showing more of their work.

As always, you'll be seeing the finest art from the finest artists around - representing the vast talents of the Pacific Northwest, the nation, and the planet.

Some of the items we will spotlight in this blog series are pieces that always seem to fly out of the gallery, so we want you to see them fast!  Here's one in particular that arrived a few days ago; we immediately listed it in the online shop last week, and it's already gone off to a new home:


Thanks to her modern styling, consistently high quality workmanship, lightweight yet cozy wearability, and the sheer elegance of her creations, artist Maggy Pavlou's pieces are hard to keep in the shop.  We have a couple of her new items in, but will they last?  We'll see!  They are the perfect weight for this time of year when the weather can't quite make up its mind; but as one of our most popular lines, we sell them all year long.


Come visit again soon; we'll be back with another What's New quick-post before you know it!
Posted by The Island Gallery at 12:04 PM No comments: 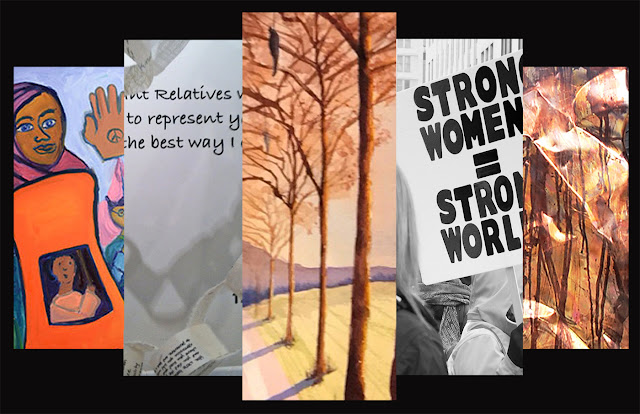