Coming up, a wonderful new show featuring the work of 15 Gallery artists: 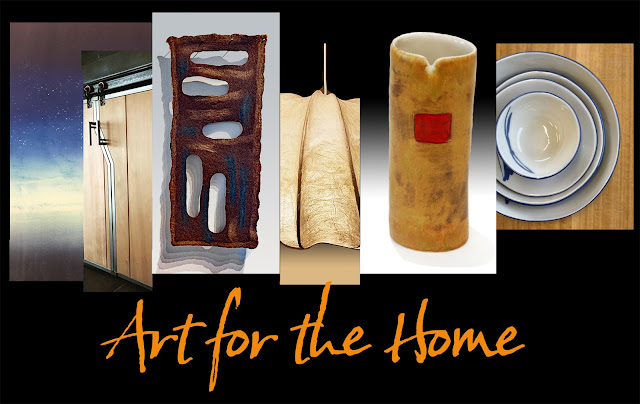 About the Musicians:
Ranger and the Re-Arrangers (Bainbridge Island, Washington)

THE GENRE:  The band plays "Gypsy jazz" or “hot jazz”, created by and named in honor of Django Reinhardt, Europe's acclaimed composer and guitarist. In the 1930s, Django and violinist Stephane Grappelli blended their own musical legacies with the new American art form of jazz.  Soon their recordings brought international fame to the genre. Gypsy jazz is characterized by upbeat, high energy swing on acoustic instruments, especially guitar, violin, bass, clarinet, and accordion. The band’s repertoire appeals to everyone who enjoys swing standards, traditional Gypsy jazz songs, and world music originals.

At the heart of the band’s sound is the sweet violin playing of RANGER SCIACCA, who began playing violin at the age of six. He divided his studies between old-time fiddle and classical violin until a chance encounter with a CD of violin jazz ignited Ranger’s interest in the music of Joe Venuti, Stuff Smith, Stephane Grappelli and Django Reinhardt. Ranger’s playing draws from all the genres he has studied and, according to one reviewer, “features frantic staccato runs and an overall sense of tone that reveals many shades and moods.”  MIKE SCIACCA is Ranger's father, and has been backing up Ranger on guitar for over 15 years. Ranger and Mike are descended from Sicilian immigrants, who played jazz in New York at the start of the 20th century.

Please contact the Gallery for further information on the band.

Underground parking is available at The Winslow off Ericksen Avenue.
Posted by The Island Gallery at 2:46 PM No comments: