Lovely autumn is on its way, and we say goodbye to summer - and hello to a grand holiday weekend - with another fun Artwalk.  Stroll downtown, say hello to friends, have a sip of wine, and enjoy the best of contemporary art.  Did we mention music?  Ranger and the Re-Arrangers will be on hand to get everyone's feet tapping with their much-loved gypsy jazz.

Here’s a bird’s eye tour of our September show!

Carl Yurdin’s long sleek walnut bench reflects his 40-year background as an industrial designer. His style can best be described as the “geometry of wood.”  Wendy Dunder, well known for her organic sculptural illuminations created from wood and paper, has created two new wall and table pieces, Carolina and With a Twist.  Chris Thompson’s whimsical functional furniture pieces are for humans and some for birds!  The textiles as wearable art from Mary Jaeger reflect her background in the Asian textile traditions of shibori, using natural indigo dyes to create contemporary American fashions.
Delores Fortuna's work uses basic wheel thrown shapes as a starting point. The clay wall becomes a fabric, a diary rich with gestural marks and intent. As a seamstress would cut, fold, and dart cloth to make a garment, she uses this clay fabric to shape utilitarian vessels.


Fortuna divides her time between her studio in Galena, Illinois and teaching at the School of the Art Institute of Chicago. Early influences in Fortuna's work were the simple yet intense forms of Hans Coper, Lucy Rie and Ruth Duckworth and the color theories of Josef Albers. Fortuna had the honor of studying with Ruth Duckworth at the University of Chicago for her undergraduate and graduate degrees and Richard Lafean was pivotal in developing her wheel throwing touch. Fortuna has always responded to work which is form simple but structurally complex and derives much visual information from a diverse array of contemporary clay artists as well as historical ceramics. Her current work is shaped as much by simple thoughts as by elaborate clay working ideas.


My passion is to make pots for people to use. My current work attempts to synthesize the causal and spontaneous traditions of pottery with a modernist and contemporary design sensibility. My 30-year journey continues to challenge and fascinate me with the magic and joy I found when I first touched clay.
And, at our fête, the full complement of Ranger and the Re-Arrangers will play gypsy jazz on the plaza, with refreshments from Bainbridge Crêpes.  Come celebrate early fall days among friends, good music and, most of all, the artistic talents of our Gallery artists!
For more details on the artists, please contact the Gallery. 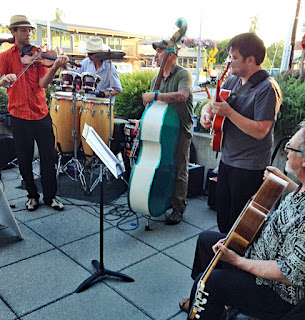 Underground parking is available at The Winslow off Ericksen Avenue.
(Parking is monitored; please use Visitor spaces.)
Posted by The Island Gallery at 5:52 PM No comments:

In the initial edition of this blog post we described the “Building Phase”
of the Flower Vases for the wedding of Dave’s daughter Sachi.
As Dave describes it, both the fun and the challenge of the
Building Phase is the opportunity to dream up a design for a vessel,
then try it out, and modify it as needed to ensure that both the
form and functional objectives are met.  At the end of the Building Phase,
Dave had designed the vases, built them, and completed initial bisque firing.
The vases were now ready for a longer firing in Dave’s wood-fired kiln.

In actual fact, Dave notes that there is not a clean break between the two phases,


but an overlap, as he fires a few design vessels in full wood-firings,
and modifies the design as necessary.  He fired two vases in a first wood-firing,
and five or more in a second.  Dave perfected the design during the
winter and early spring.  After modifications and further testing,
he had the vase design that he wanted for final firings.

In twelve years of observing potters engaged in wood-firing of ceramics,
we have never run across a wood-firing potter who does not love it.
Dave says he enjoys the firing process because of the physical activity
and the challenge of the firing itself.  Here the challenges include
the physical risks to the ceramics at 2,400+ degrees for extended
periods, wood that doesn’t always burn the same, and weather
that can affect the results.

Or, perhaps, the Kiln God may simply frown on you that day.

The kiln sits in one corner of a lovely pasture.  When we visited,
the activity was under the eye of two watchful sheep. 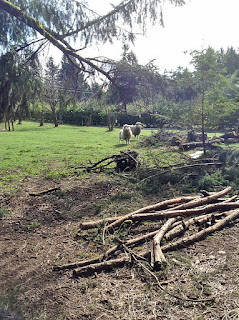 They keep the pasture closely mowed and fertilized.  They are
very attentive to what the potters are doing and don’t appear to mind
a couple of extra observers. 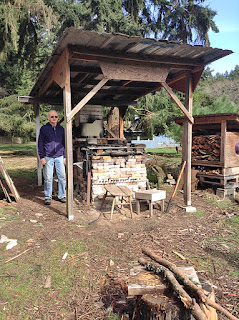 Joe has an MA in teaching and a MFA in ceramics and for many
years operated a commercial ceramic firm and participated in the design
and creation of ceramic and enamel murals for the City of New York
and for the Orlando Municipal Airport.  His current firings are
focused on glazes and his “experiments” produce beautiful hues,
helping to expand the wood-fired color palette.

The kiln is typically fired about twelve times each year.
Wild fire concerns limit summer firing.  So, it is fired about twice
a month during safe periods.  Firing activities can be pretty intense
and entail: preparing the kiln, loading it with the pottery to be fired,
building the fire and raising it to the proper temperature,
maintaining the temperature over time and finally unloading
the final product and making final touch-ups.

The kiln is a cross-draft design with firebox on one side and
exhaust on the other.  It is loaded from the top and has several shelves. 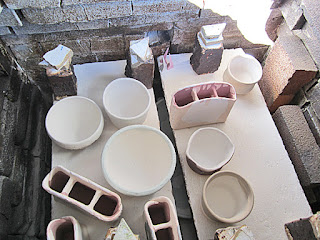 Like life, position in the kiln is often destiny.  Temperatures vary
within the kiln.  Some of the pieces will be closer to the flame
than others, or may be affected by different air flows depending
on the positioning of the ceramics.  All this has an impact.
Knowing this, potters attempt to take advantage of positioning
to enhance the desired results.  Loading takes time and thought.

Not only does inside positioning affect the result, but so do
outside conditions (temperature and humidity) and type and
condition of the wood being used.  Thus, different firings,
conducted in the same manner, can provide different results.
As in all art, the element of chance can play
an important part in the result.

Finally loading is completed, the kiln is closed and the fire is started. 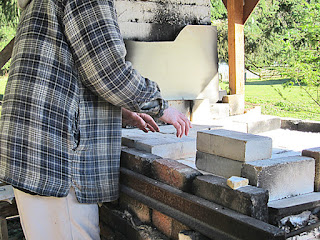 There is a reason you don’t see many “plump” wood-firing potters.
These potters will easily max out their Fitbit during a firing. 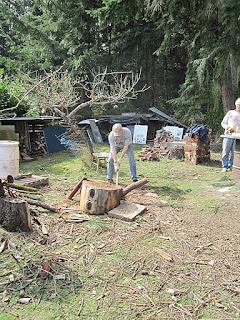 After they have the kiln going they must feed it for many hours.
This demands the use of the wood the potter has previously cut,
split and stockpiled, and possibly more.  The requirement is to
reach the desired temperature and maintain it. The routine
becomes very focused: check the temperature, feed the fire.
Observers, including sheep, tried to stay out of the way. 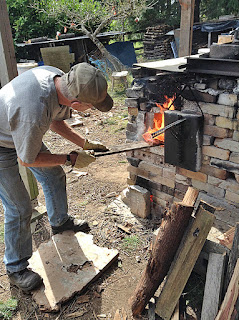 On the day we were observing the firing, the kiln was being
a bit cantankerous.  It was having difficulty achieving
and holding the desired temperature. 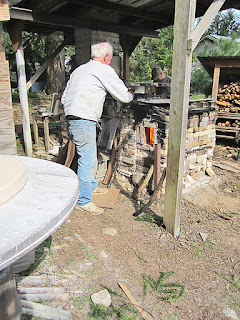 Dave and Joe were adding wood, removing some bricks to
acquire more air for combustion, and finally,
speaking nicely to the Kiln God. 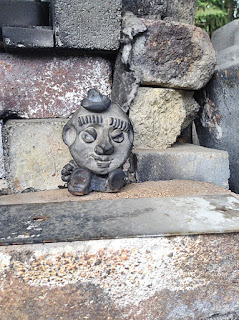 After a good deal of toil, the combination of activities
was successful.  Peering into the flames, the potters
confirmed that they had achieved and maintained Cone 11
(a temperature in excess of 2,400 degrees Fahrenheit)
for the required time. 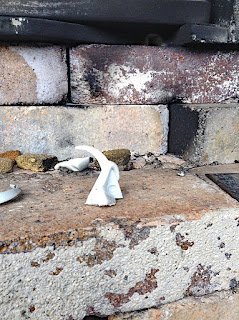 Now it was time to reverse the process and start cooling it down.
The shadows were lengthening as Dave climbed up and reduced
the air to the fire.  It had been a long day. 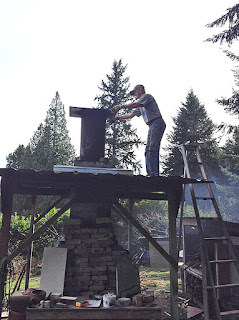 The following day’s activities started late in order for the kiln
and its contents to cool down sufficiently to handle.   Dave and
Joe removed the bricks and insulation covering the top of the
kiln and had their first glimpse of the firing results.  Despite the
difficulty with the kiln’s temperature regulation,
the firing had been very successful. 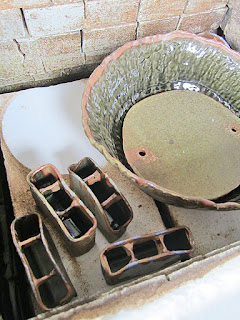 The four flower vases and the bird bath shown in this picture
were outstanding, as were the remainder of the contents. 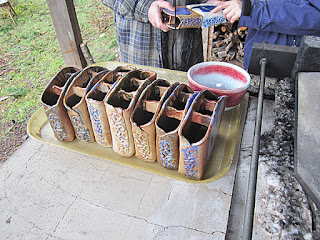 As the unloading continued, the smiles got bigger.


It was a great firing.

When the kiln was unloaded the vases were taken to
Dave’s studio for inspection. It confirmed the positive
assessment of the firing.  But their work wasn’t yet complete.
Another set of bisque-fired vases were sitting ready to
be a part of the next firing. 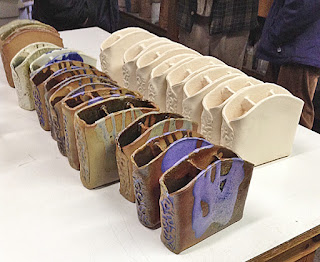 However, it was clear that the effort was coming
to a successful closure.

We will highlight the vases at the wedding. Stay tuned.

Wood-fired ceramics are an important part of The Island Gallery’s art portfolio.
If you want a bit more information on the history
and art of wood-fired ceramics we recommend the short essay
Faith and Fortuitous Beauty: Thoughts on wood fired pottery by the
Gallery’s own Susan Roth.
It is located at http://www.theislandgallery.net/ceramics.php.


Enjoy!
Posted by The Island Gallery at 1:08 PM No comments: