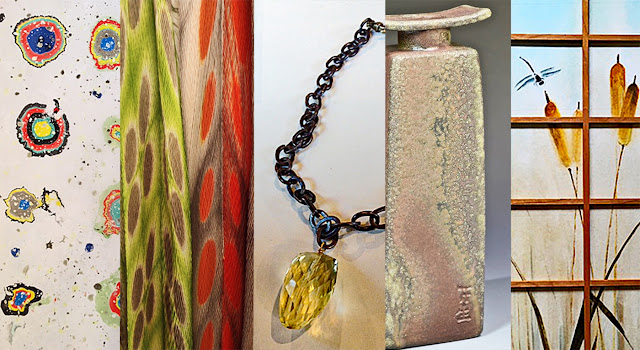 IMAGES SHOWN ABOVE, LEFT TO RIGHT:

Randy Acker (Olympia, Washington):  Randy designs and builds objects for people who desire both utility and beauty in the items that are a part of their everyday lives. Throughout his life he has been drawn to science and the natural world, and believes that the more connected we are to that world, the more we are inclined to truly value our natural heritage. He sees wood as a perfect medium for creating a bridge between the natural world and our everyday indoor environments. Where possible, he uses natural edges and defects, such as cracks, holes, or insect damage in his work, since they serve as a reminder that wood, no matter how carefully cut and finished, is still a product of the natural world.  While he started woodworking around age seven, he pursued a career in state government, and before retiring served as an executive manager for the Department of Natural Resources.

Chris Demarest (Bainbridge Island, Washington):  Born in New England in 1951, most of Chris’s career has been in children’s publishing with over 100 titles to his credit. FIREFIGHTERS A to Z was a New York Times Best Book (2000).  Research has taken him as far as the Persian Gulf, as an official artist for the US Coast Guard, as well as flying into Hurricane Ivan with the Hurricane Hunters.  From 2011-2017, he traveled the country painting in museums and libraries portraits of World War II era men and women while collecting their stories. The tour brought him to Bainbridge Island in 2017 where he documented the internment of local Japanese Americans, the main painting now hanging at the island’s Historical Museum. In 2018, he settled on Bainbridge Island where he began exploring sculpture in wood and shoji paper, leftovers from a teahouse studio he built. The World War II exhibit is now permanently housed at the Palm Springs Air Museum, Palm Springs, California. A smaller exhibit is currently touring Alaska.


Len Eisenhood (Bainbridge Island, Washington):  After several decades of paper marbling, Bainbridge Island artist Len Eisenhood utilizes his experience of both classical and innovative marbling techniques to create richly beautiful papers. Each one possesses a synergy of intention and serendipity.  Marbling is a hydroprint process that was developed in Japan in the 7th century and in Persia in the 13th century. Pigment is dropped on a size made from carrageenan moss and water, then manipulated into patterns. Paper made mordant with an alum solution is laid on the size and picks up the design. This creates a unique marbled paper, although color palettes and basic patterns can be repeated.

Thomas Fossier (McKinleyville, California):  Thomas Fossier, a retired pilot, began working with clay while living in New Zealand some 20 years ago. His primary focus is wood-fired vessels, fired in his anagama kiln in northern California. He explores form and surface with a Zen sensibility. In his own words:

I have spent much of my life walking in the high mountains and desert canyons of the American West. Rocks and colorful soil are the most essential features of these landscapes, and my aesthetic vision has been tuned to the characteristics and beauty of mineral surfaces. I find that I am a materials enthusiast, and love ceramics for reasons similar to my love for Western landscapes: the colors and textures, and the sense of material substance and solidity in three-dimensional space. …The medium of clay is inspiring for both its forming and firing characteristics, and I am drawn to exploring its limits, bringing attention to its specific properties. Firing my work in a wood-burning kiln, at very high temperatures for multiple days, brings out the tactile and colorful potential of clay and melted ash. The unique character of different clays becomes markedly evident after immersion in this transformative environment…. I see my clay forms as both canvases upon which I will paint with fire, and as the formal structural elements which balance the organic patterns that flame creates. There is an opportunity for serendipity that wood-firing engenders since it is a collaboration between the potter’s intention and natural process that is not wholly controllable, and thus the seemingly random complexity of nature is evident in every piece.

Rosette Gault (Bainbridge Island, Washington):  Dr. Gault has been contributing to the field of artistic ceramics since 1970.  She earned her M.F.A. in ceramics from the University of Puget Sound, Tacoma, Washington in 1977-‘78 and her Ph.D for Innovation from the University of Sunderland in the United Kingdom in 2014.  As an artist she explores the substance of paperclay as a tangible thought form in service to practical and expressive needs of mankind. Her award winning ceramic sculpture and commission work has been exhibited widely since 1978, and is included in public and private collections around the world.  As a visual artist and teacher, she has been invited to present at numerous workshops and master classes at top universities, symposia, and art schools worldwide.  She has been involved with numerous artistic ventures in the Pacific Northwest and beyond and is currently affiliated with the University of Sunderland National Center for Glass and Ceramics Research in the northeast of England.  Over the years her work has appeared in many publications and she has authored a number of books.  In 1990, she isolated the optimum ratio of (recycled) paper pulp to clay that would permit her to work wet on dry, patch dry cracks and extend the repertoire of methods never known possible to fire with traditional clay or manmade fiber composite clays. Her work has served as a technical impetus behind much innovation and advancement in international ceramic art and design.

Betsy Giberson (Warner, New Hampshire):  Betsy Giberson was born in Washington, D.C. and completed a BFA in Sculpture from the Rhode Island School of Design. Her background and work in sculpture is reflected in her textile art which features shibori and sculptural elements in collaged pieces with exposed seams. She is exhibited at multiple venues throughout the United States and makes her home in New Hampshire.  Her garments are exquisitely crafted of crinkled silk crepe de chine, organza and noil. Surface decoration is achieved with shape-resist, piece dying, and overdying. Pieces are often enhanced with stamped designs.

Ana Lisa Hedstrom  (La Honda, California): Ana Lisa Hedstrom is known for her signature textiles based on contemporary adaptations of Shibori. Her textiles are included in the collections of major museums including the Smithsonian Cooper Hewitt, the Museum of Art and Design, and the De Young Museum in the United States, and the Takeda Kahei Shoten and Aiichi Shibori Archive in Japan. Her work has been exhibited and published internationally, including in Canada, China, Germany and Thailand. Ana Lisa has taught and lectured at numerous international Shibori conferences and schools, including in Australia, Chile, England, Japan, India, Canada as well as the United States. Her awards include two NEA grants and she is a fellow of the American Craft Council. She holds a BA in Art from Mills College.

Laura Hunter  (Olympia, Washington):  As an artist I am drawn to themes of repetition and evidence of change. I am fascinated by subtle marks that suggest something else that is there or has been there. The Japanese form of bound resist dying called Shibori speaks to both of these ideas. All of my scarves, shawls, and apparel are individually made using one or more types of shibori. Arashi Shibori is a pole-wrapping technique which creates pleats and varying patterns on silk. Itajime Shibori is a folding and clamping technique which creates dyed shapes on fabric…  Creating and selling Shibori has been my livelihood for 20 years. I have a BFA in Fiber Art from the University of Washington. I work in my home studio with some physical assistance and much encouragement from my husband, Allen Olson. We live in Olympia, Washington with our two sons where we enjoying cooking, our garden, and a relatively slow-paced lifestyle.

Jacki Moseley (Bainbridge Island, Washington):  Jacki began felting in 2012 after being attracted to the texture and dimension of felt for many years – fascinated by its properties, how to make it, and how to make things with it. She has most enjoyed making bowls, vessels and wall hangings. She also worked with beads, sewing them onto her creations, which are made with merino wool. She uses both wet and needle felting processes, where the wool ﬁbers become intertwined to create a design and/or a form.

Virginia Paquette (Seattle, Washington):  An MFA graduate in painting from the University of Washington, Virginia Paquette has worked and exhibited internationally. Her art responds to motion and memory, and is inspired by natural forms and phenomena. Winner of numerous public art commissions, Paquette has collaborated with her husband, Bill Smith, on site performance installations here in the Pacific Northwest and Seattle area, as well as around the world, including “Deluge,” created for Queen Victoria Museum, Launceston, Australia, “Saffeides” at Teatro Greco in Rome, and with ARTKOAMIA performance consortium.  For a recent residency at the Conservatorio di Musica in Bologna, Virginia created mixed-media works as part of a collaboration with Bill Smith. They presented her visual responses to his works of music, influenced by their years together in Italy. Paquette responds to Smith’s music with color, line, rhythm, gesture, and collage of found images, salvaged from the streets of Italy.

Established in 2002, The Island Gallery features internationally recognized artists whose work takes traditional art  forms in exciting new directions:  studio furniture and sculpture;  museum quality textile art  and wearables; wood fired ceramics from the finest potters in America; paintings and prints; and unique jewelry creations. Monthly exhibitions include live musical concerts, featuring such genres as jazz, rock, folk, chamber music and performance art.  This, along with its reputation for excellence, makes The Island Gallery a destination spot on beautiful Bainbridge Island, a short ferry ride from Seattle, and steps from the new Bainbridge Island Museum of Art.  In 2017 we celebrated 15 years of collaboration with unique and talented artists from near and far.

Posted by The Island Gallery at 2:03 PM No comments: